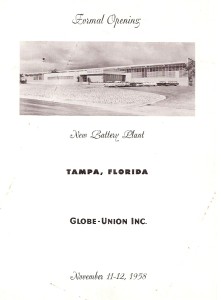 Cover of a pamphlet given to guests of Globe-Union’s formal opening of its new Tampa, Florida plant

Globe-Union formally opened its new battery plant on a 17-acre site in Tampa, Florida with a two-day celebration that began on November 11, 1958.

Built at a cost of over one million dollars, the new facility was expected to employ 100 workers in its 68,000 square feet of manufacturing space.  A special feature of the plant was its ventilation system, which completely recycled the air in the plant every four minutes.

Chester O. Wanvig, Jr., Globe-Union president, commented: “There is no odor, no noise, no dust, and no smoke from the new plant.  Our company pioneered in the field of cleanliness … .”

The formal opening was attended by local dignitaries and representatives from companies for whom Globe made batteries, including Sears, Goodyear, Gulf Oil, and Atlas.  Several plant tours were given to the public and guests as part of the festivities.