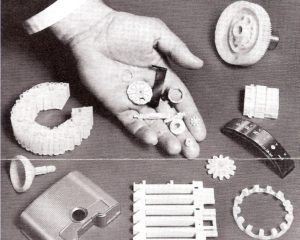 A few of the many injection molded thermoplastic products produced by the Quinn-Berry Corp.

On January 6, 1964, the Hoover Ball and Bearing Company acquired the Quinn-Berry Corp. of Erie, Pennsylvania, an injection molder of thermoplastic parts used in a number of consumer and industrial products.

Hoover was to operate Quinn-Berry, which had annual sales of approximately $3 million, as a subsidiary.  Clifford Simmons, Hoover chairman of the board, stated, “Hoover foresees a bright future in plastics due to the introduction of new, superior types of materials.”

The Quinn-Berry purchase was one of a number of acquisitions made by Hoover in the 1950s and 1960s as the company sought to diversify its product lines while continuing its initial core business of manufacturing steel balls and bearings.

When it was acquired by Johnson Controls in 1985, Hoover was the largest independent manufacturer of seating for cars and light trucks in the country, and also continued to produce thermoplastic parts for automobiles and other applications.  Johnson Controls continued Hoover’s business in automotive seating and, today, Johnson Controls’ spin-off, Adient, is the world leader in that industry.