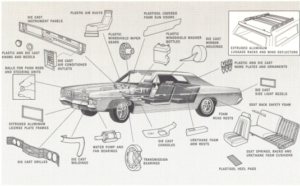 The September 24, 1968 edition of Hoover News, a Hoover Ball and Bearing Company newsletter included in the company’s 1968 annual report, carried a feature on the company’s automobile parts business.

In 1959, Hoover products for the automotive industry consisted of die cast parts and a limited number of ball and bearing types.  However, as the company diversified and expanded through a series of acquisitions in the 1960s, so did its automotive parts lines.  Most notable were the acquisitions of Universal Wire Spring, Inc. in 1960 and Stubnitz-Greene Corporation in 1964.  Universal Wire Spring made automotive seat springs and backs, while Stubnitz-Greene produced urethane foam automotive seat cushions, head rests, and arm rests. By 1968, Hoover was not only a leading manufacturer of automotive seats, but was a pioneer in the burgeoning market for plastic automotive parts.