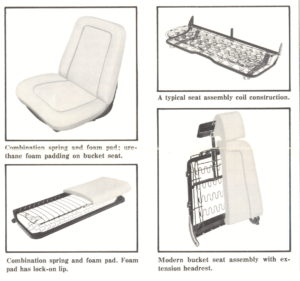 Hoover Ball And Bearing Company entered the automobile seat spring business on May 31, 1960 with its acquisition of Universal Wire Spring, Inc., which had plants in Georgetown, Kentucky and Solon, Ohio.

Hoover was founded as the Hoover Steel Ball Company in 1913 by Leander Hoover in Ann Arbor, Michigan.  By 1924, the company had added bearings to its product line and, subsequently, changed its name to the Hoover Ball And Bearing Company.

The company began to diversify its product lines further starting with a number of acquisitions in the 1950s and 1960s, of which the Universal Wire Spring acquisition was a part.  When the company gained urethane foam technology for automotive seating with its purchase of the Stubnitz Greene Corporation in 1964, it became a leader in the automotive seating industry.

The company changed its name to Hoover Universal in 1978 to reflect the fact that it no longer made bearings.

Johnson Controls acquired Hoover Universal in May 1985, by which time Hoover was the largest independent manufacturer of seating for cars and light trucks in the United States.