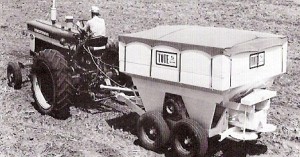 On August 29, 1966, the (Canadian) Financial Record announced that Hoover Ball and Bearing had purchased all the outstanding shares of Tillsonburg Machine Works, Ltd., a manufacturer of dry bulk fertilizer spreaders in Tillsonburg, Ontario.

Hoover intended to operate the newly acquired facility as a subsidiary of their Tote Systems Division, and planned to produce the full line of Tote fertilizer applicator equipment there.  The machine and welding shop operations of Tillsonburg Machine were to continue as well.

When Johnson Controls acquired Hoover in 1985, it continued Hoover’s automotive seating operations; however, the Tote bulk materials handling division was sold to Citicorp Venture Capital a few months after the acquisition.

Today, the company continues to maintain an automotive seating plant in Tillsonburg.