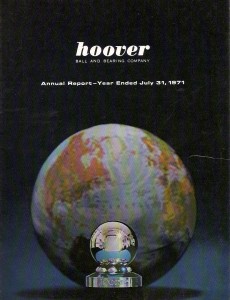 On January 14, 1971, The Lamar Democrat from Lamar County, Alabama reported that Hoover Ball and Bearing Company of Ann Arbor, Michigan and Nippon Seiko K. K. (NSK) of Tokyo, Japan agreed in principle to establish a jointly owned company in the United States to manufacture antifriction bearings.

Hoover President John Daly and NSK President Hiroki Imazato made the announcement that introduced the new company, which was to be named Hoover-NSK Bearings, Inc.

Hoover had been manufacturing steel balls and bearings since 1913, while NSK was Japan’s largest producer of bearings.  The two companies had been working together since 1958 to distribute NSK bearings in the United States and Canada using the trade name Hoover International.

Under the new agreement, which was not consummated until March 1973, Hoover sold its Bearing Division plants to NSK in exchange for 50% of the new venture’s stock.  In 1975, Hoover sold its 50% interest in Hoover-NSK to NSK for $10 million, exiting the bearing business altogether.

Johnson Controls acquired Hoover Ball and Bearing (which had been renamed Hoover Universal) in 1985.