Innovative Battery in the Rambler 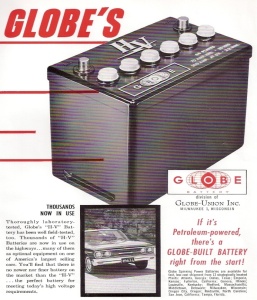 An article from the August 16, 1963 edition of The Milwaukee Journal reported that Globe-Union had developed a new type of battery, the “H-V,” which had been introduced the year before on a limited basis, but was now in full production.

By shortening the path of electrical flow from one cell to another, the intercell connectors lowered the internal resistance of the battery.  This meant the “H-V” had higher voltages and more usable power to start an automobile more quickly and reliably, especially at low temperatures.  Quicker starts reduced wear on the battery, thereby extending its life expectancy.

Also, the cast-on-strap process eliminated external cell posts and connector links on top of the battery (as in standard batteries of the time), so the “H-V” did not have the problem of acid-produced corrosion around each connector link.

The “H-V” was included in the American Motor Corporation’s Rambler models beginning in 1962, and was to be standard equipment in all of the company’s 1964 automobile models.