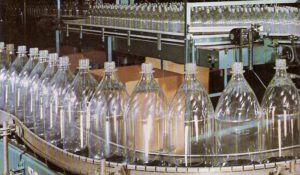 Hoover invested $28.6 million to increase production of “family size” two-liter PET soda bottles such as the ones shown here

On August 3, 1978, Hoover Universal announced that it was devoting the largest capital outlay in its history – $28.6 million – to increase its capacity to produce “family size” two-liter polyethylene terephthalate (PET) soda bottles.

Hoover first began producing PET bottles (for PepsiCo) in June 1977.  They proved to be a hit with consumers, as the PET bottles were shatterproof, recyclable, and thirteen times lighter than their similarly-sized glass counterparts.

According to Hoover CEO John Daly, “packaging industry experts estimate that there is a significant, unmet present day demand for bottles of this type [PET], providing us with the opportunity to build a sizeable new business within Hoover Universal.”

Johnson Controls acquired Hoover in May 1985, and continued to make PET bottles until 1997, when it sold its plastic container business to Schmalbach-Lubeca AG of Germany.