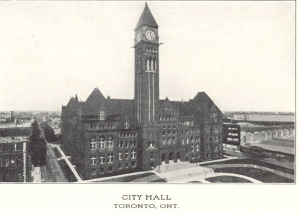 On August 21, 1897, a Johnson Electric Service Company (Johnson Controls’ original name) contract employee named James Hamilton began installation of a Johnson temperature regulating system in the Toronto City Hall then under construction. Hamilton earned 15 cents per hour for the installation work.  For the 50 hours he worked that week – nine hours per day Monday through Friday and five hours on Saturday – he earned $7.50.

Canada at the turn of the last century was a promising new market for the temperature control business, which the Johnson Electric Service Company recognized early on.  In fact, two years after the Toronto City Hall job was completed, company founder Warren Johnson personally went to Toronto to register the business under the name of the Johnson Temperature Regulating Company of Canada, thus establishing a permanent company presence in that country.

In January 1907, Johnson and William Fenn (the branch manager at Buffalo, New York) entered into a partnership to continue the controls business in Canada.  After Warren Johnson’s death in 1911, the company bought the Johnson Temperature Regulating Company of Canada from Johnson’s estate in 1912, thereby establishing the company’s first wholly-owned subsidiary.

As for the Toronto City Hall, it was the largest municipal building in North America when it was completed in 1899.  It was saved from the wrecking ball by public outcry after a new city hall was completed in 1965.  Today, the Romanesque Revival building is still used by the Ontario Court of Justice.