JCI in the Sky! 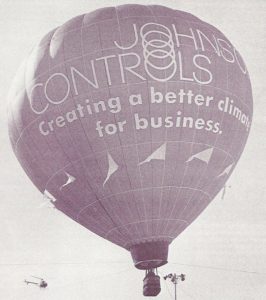 Johnson Controls’ hot air balloon made its public debut on March 9, 1984 as it was being filmed as part of a series of company television commercials that were to air during the Summer Olympics later that year.

The decision to advertise on network television, a first for the company, had been made back in March 1981.  In the following years, Johnson Controls conducted an extensive study to determine the objectives of the ads.

The ad campaign featuring the balloon and the slogan “Creating a Better Climate for Business” was chosen over seven other competing campaigns that were submitted.  It was hoped that the balloon would become a memorable symbol of the company and its products in the same way that the blimp served that purpose for Goodyear.

A helicopter was used to film the 63 foot high, blue balloon as it was tethered 25 feet over Milwaukee’s County Stadium parking lot.  The balloon would later be filmed in other locations, such as the Superdome in New Orleans, to highlight the company’s energy management systems in buildings of all sizes.

The balloon, which was named “Performance 1” as a result of an employee contest, was also used in print ads and in subsequent television ads that ran during Super Bowl XX in January 1986.