Johnson Controls saves millions of dollars for Maryland school board 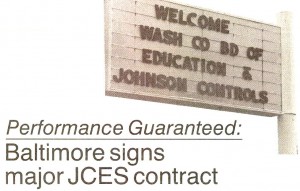 A Hagerstown, Maryland hotel sign welcomes Johnson Controls and the Washington County (Maryland) Board of Education for their contract signing on June 16, 1983

On June 16, 1983, the Washington County (Maryland) Board of Education announced that it had entered into a five-year energy management partnership with Johnson Controls that was believed to be the largest energy services agreement ever reached (up to that time) between a school district and a private contractor.

The Board’s press release noted that Johnson Controls had guaranteed fuel and electricity savings in excess of $2.5 million over the term of the contract.

Dr. Claud Kitchens, Superintendent of Washington County Public Schools, remarked that “we believe this is a significant step in channeling more educational dollars back into the direct instruction of students.”  Kitchens went on to say “we also believe that the joint enterprise between private industry and an educational institution, along with the concomitant energy conservation, are reflective of local and national interests.”

The agreement was symbolized by the signing of a formal document during a ceremony in Hagerstown, Maryland, which was attended by state, county, and school board officials, as well as representatives of Johnson Controls.