A contract for what was expected to become the largest single controls project in the history of Johnson Controls’ Systems and Services Division was signed with International Harvester on July 30, 1980.

Johnson Controls was picked over twenty other companies for the energy conservation contract, which covered all of International Harvester’s worldwide facilities (including factories, foundries, and warehouses), and had a potential value of more than $16 million in ensuing years.

Many of the slated facilities were large production facilities which, at that time, were a relatively new market for Johnson Controls.  JC/84 systems were to be installed in the larger complexes, and JC/85 systems in the mid-sized facilities.  The systems were expected to save International Harvester $60 million over the first five years of the agreement.

Wayne Brunner, International Harvester’s director of facility environmental quality and energy management, commented that “we consider electronic energy management systems, along with full time energy coordinators at each major location, key ingredients in accomplishing our five year commitment to further reduce energy consumption at the rate of 3% per year.”  International Harvester was at that time an $8.4 billion manufacturer of trucks, agricultural equipment, and off-road vehicles. 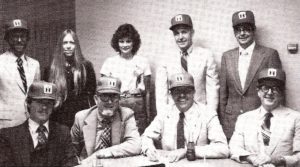