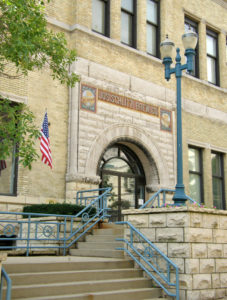 A ledger entry in a Johnson Electric Service Company (Johnson Controls’ initial name) contract book, dated February 7, 1890, notes a heat regulation installation made at an office building of the Joseph Schlitz Brewing Company in Milwaukee.  The contract amounted to $550 and was scheduled to be paid in full by January 1, 1891.

Schlitz Brewing began as a tavern brewery in 1849.  Founder August Krug subsequently hired a German immigrant, Joseph Schlitz, as a bookkeeper.  After Krug passed away in 1856, Schlitz took over management of the brewery and named it after himself.

The company began to succeed after the Great Chicago Fire of 1871, when Schlitz donated thousands of barrels of beer to that city, which had lost most of its breweries.  He quickly opened a distribution point there, beginning a national expansion.

Schlitz died in 1875, and control (and eventual ownership) of the company passed into the hands of the Uihlein brothers, nephews of founder August Krug.

The well-known company slogan “The Beer That Made Milwaukee Famous” was introduced in 1893 at the Columbian Exposition in Chicago.  By 1902, Schlitz had become the largest brewery in the world, and would remain one of the top beer producers in the country through the mid-1970s.

Faced with the need to meet large volume demands while also cutting the cost of production, the brewing process on Schlitz’s flagship Schlitz beer was changed in the early 1970s.  The reformulated product resulted in a beer that lost much of the bite and taste of the old formula and, consequently, its public appeal waned.

Schlitz was eventually acquired in 1982 by the Stroh Brewery Company.  In 1999, Pabst Brewing Company acquired the rights to the Schlitz brand, and began marketing Schlitz in its pre-1970s formulation in 2007.