A Milwaukee Journal headline on November 8, 1953, announced “Alaska’s Building Boom Sparks Sales for Temperature Controls Firm Here.”  The article explained that the Johnson Service Company (Johnson Controls’ former name) played a leading role in making Alaska (where temperatures range from 90 degrees above zero in the summer to 60 degrees below zero in the winter) a comfortable place to be.

The company had been doing business in Alaska out of its Seattle branch office since the 1930s.  However, the company’s history in Alaska goes back to at least 1917, when it installed an automatic temperature regulation system in a Juneau school.

Between the years 1951 and 1953, Johnson saw a rapid expansion of business in Alaska, as the territory experienced a military and civilian construction boom.  Sales went from $10,000 a year prior to 1951 to $250,000 a year from 1951 to 1953.  Among the dozen Johnson installations in progress at the time were a high school in Ketchikan, a power plant in Whittier, a U. S. Air Force base near Fairbanks, and a hospital in Anchorage.

In 1963, the company opened a branch office in Anchorage to handle installations throughout Alaska, which had been granted statehood on January 3, 1959. 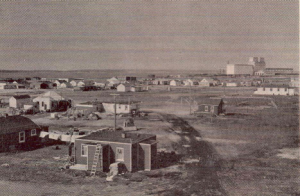