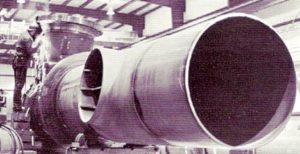 On July 22, 1977, the first barrel of oil from Alaska’s Prudhoe Bay completed its 800-mile journey through the Trans-Alaska Pipeline to the Valdez Marine Terminal (where the oil is stored for shipment by tanker).

Johnson Controls’ Power and Process Piping Division had the subcontract from Fluor Corp. to furnish the piping systems for the entire Pipeline’s pumping stations.  Johnson Controls entered the industrial piping business in 1966 with its acquisitions of the Associated Piping and Engineering Company of Compton, California, and the Western Piping and Engineering Company of Los Angeles.

In 1987, the company sold the Piping Division to Smock McGhee Company, Inc. of Chicago.  As for the Pipeline, at its peak in 1988 it carried two million barrels of oil a day, but by 2008, as oil production from northern Alaska’s oil fields fell, the Pipeline was carrying only 700,000 barrels a day.  As a result, only five pumping stations were still in operation.

The Trans-Alaska Pipeline, constructed from 1974 to 1977 at a cost of $8 billion, is privately owned by the Alyeska Pipeline Service Company, a consortium of several oil company giants.  As of 2010, the Pipeline has shipped almost 16 billion barrels of oil.