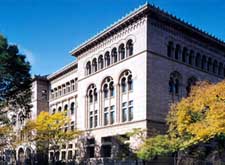 The Newberry was founded in 1887 following a bequest from the estate of Chicago land developer and city leader Walter Loomis Newberry.  Free and open to the public, the Newberry has since grown into one of the world’s leading repositories for materials relating to the civilizations of Western Europe and the Americas.