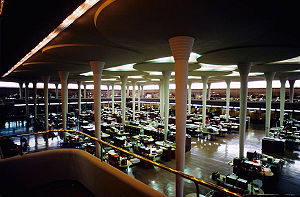 Based in Racine, Wisconsin, S. C. Johnson is a global manufacturer of household cleaning supplies and other consumer chemicals marketed under such brand names as Windex, Glade, Raid, and Drano.

Renowned architect Frank Lloyd Wright designed the building, which incorporated many unusual architectural elements.  Because of the building’s design, a conventional radiator heating system could not be employed.  Instead, a radiant heating system that employed steam pipes hidden under the floors was used.

The York Ice Machinery Corporation (later York International, which was acquired by Johnson Controls in 2005) designed and installed the floor piping system, which was divided into five zones, each controlled by a Johnson Service Company (Johnson Controls’ former name) Duo-Stat.

A research tower, also designed by Wright, was added to the main administration building in 1944.  The entire building was designated a National Historic Landmark in 1976.

While the Research Tower is unused today because of current fire codes, the rest of the building remains in use as S. C. Johnson’s world headquarters.