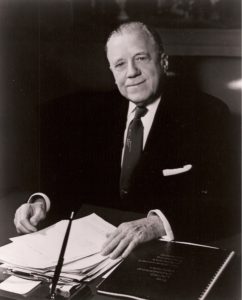 Joseph Cutler, the fourth president of the Johnson Service Company (later Johnson Controls), was born on November 29, 1886, in Dodgeville, Wisconsin.

He received a Bachelor of Science degree from the University of Wisconsin’s College of Engineering in 1909.  That same year, he accepted an instructor’s position in the Department of Civil Engineering at the University.

In 1912, he left academia and began his career with Johnson Service Company as a sales engineer.  The talented young engineer’s background in both engineering and instruction made for a successful long-term career with the company.

As a sales engineer, he worked in the Kansas City, Dallas, and Chicago branches. In 1928, he was elected a vice president and director of the company and, in 1935, added the position of general sales manager.

When Harry Ellis retired as company president in 1938, Cutler was named president and general manager – positions he was to hold through 1960.  In 1961, he was named chairman of the board.

Outside of company life, Cutler was one of the original board members of the University of Wisconsin Foundation.  He was also president of the Wisconsin Alumni Association from 1946 to 1947.  In 1964, the Association honored him with its distinguished service award.