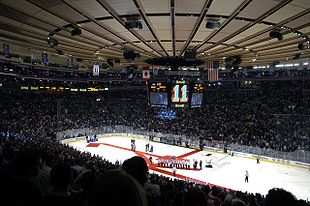 The fourth (and latest) incarnation of Madison Square Garden in New York City was opened on February 14, 1968.

The Garden was part of a new office building and entertainment complex built on the site of the old Pennsylvania Station, which was remodeled and moved completely underground below the new construction.

The Johnson Service Company (Johnson Controls’ former name) supplied the environmental controls for not only the Garden entertainment complex, but also the 30-story office building next door, and the train station underneath the two buildings as well.  In all, 2,300 thermostats were installed, along with fifty independent air-conditioning units to control the temperature and humidity for the widely-varied environments found in the three buildings.  Johnson also equipped the refrigeration system that produced ice for the hockey rink.

Today, the Garden is billed as the “World’s Most Famous Arena.”  It is home to the NBA’s New York Knicks and the NHL’s New York Rangers.