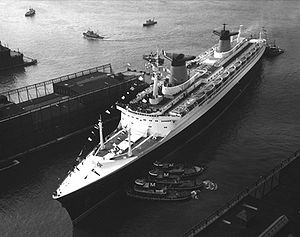 The new $80 million luxury liner had been under construction since 1957 in the Atlantique shipyard at St. Nazaire, France.  At 1,035 feet in length, the super liner was as long as the Eiffel Tower is tall.  It would remain the longest ship afloat until the construction of the 1,132 feet RMS Queen Mary 2 in 2004.

The France featured 2,000 passenger cabins, a dining room with a 1,000-passenger capacity, libraries, music rooms, hair dressing salons, gift shops, etc. …, all of which were completely air-conditioned and temperature controlled by a Johnson system that featured over 1,500 individual room thermostats.