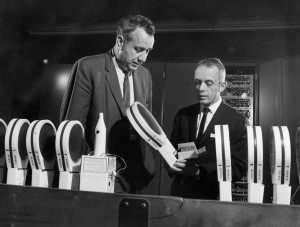 Edward Jurasinski (left), director of special products and controls for the Johnson Service Company, examines a radiometer with Peter M. Kuhn, a University of Wisconsin meteorologist

The Milwaukee Sentinel reported on February 6, 1965 that the Johnson Service Company (Johnson Controls’ former name) had filled a $20,000 contract to produce 750 radiosondes and radiometers for the United States Weather Bureau.

While Johnson had been making radiosondes since World War II, the radiometers had been recently developed by meteorologists from the United States Weather Bureau and the University of Wisconsin to detect infrared radiation in the atmosphere.  Both instruments were to be used as part of a project to determine the effect such radiation has on the Earth’s weather patterns.

Lifted into the sky by weather balloons, the radiometers took measurements that would be sent back via radio signals from the radiosondes (also attached to the balloons) to recording stations on the ground.

Although radiometers had been around for generations, the Johnson models marked a breakthrough in their combination of extreme sensitivity (they could detect a temperature change of one degree Fahrenheit from 100 miles away) at an inexpensive price ($30 apiece).

Not only were the radiometers expected to improve weather forecasting, Johnson engineers believed they had applications for the Company’s environmental control systems as well.