Madison Branch Office at the Circus? 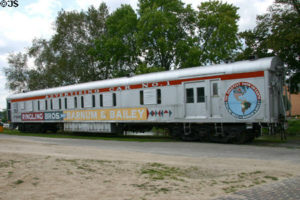 One of the passenger cars from the Circus World Museum Train on display at the Museum grounds in Baraboo, Wisconsin

The Train was made up of a collection of 31 vintage railroad cars used in the past by the Ringling Bros. and Barnum & Bailey Circus to transport their circus across the country.  Five of the Train’s cars were Pullman passenger cars each with a “Pullman Air Conditioning System.”

To make sure the passengers were comfortable on their 120-mile trip to Milwaukee, technicians from Johnson Controls’ Madison branch were enlisted to check and service the system.  The Train’s trip to Milwaukee for the Parade was an event in itself as onlookers lined the tracks all along the route.

The Parade was first held in Milwaukee in 1963 and has been held there thirty times since – the last time being in 2009.

The Circus World Museum, a National Historic Landmark site, opened to the public in 1959 on land where the Ringling Brothers founded their circus in 1884.  Spread out over 30 buildings on 64 acres, the Museum has one of the largest collections of circus artifacts in the world, including over 210 original wagons and vehicles used in the Parade.