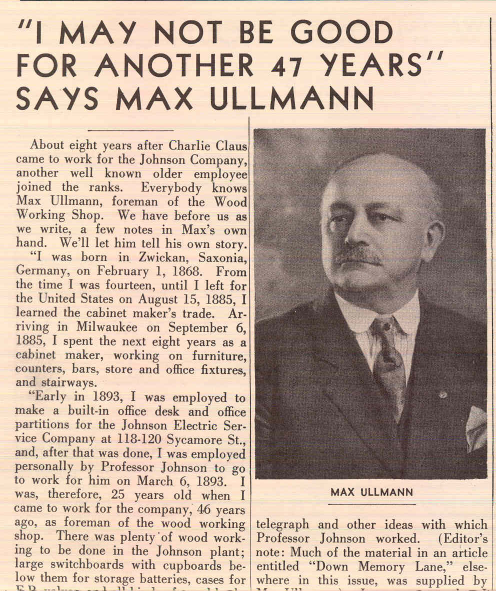 Max Ullmann from a 1939 article in The Johnson Factory Newsletter

Early in the history of Johnson Controls, founder Warren Johnson was apparently personally involved in the hiring of employees.  On March 6, 1893, Warren Johnson hired Max Ullmann, a 25-year-old German immigrant, as the foreman of the factory’s woodworking shop.

Mr. Ullmann gave his story to The Johnson Factory newsletter in June 1939, when he had been employed with the company for 46 years.  Ullmann stated that he was born in 1868 in Zwickau, Saxony, Germany (coincidentally, Johnson Controls’ Automotive Experience Business Unit has operated a plant in Zwickau since 1991).  He immigrated to Milwaukee in 1885 and spent the next 8 years as a cabinetmaker, working on furniture, counters, bars, store and office fixtures, and stairways.

Ullmann was originally hired to work on a built-in desk and office partitions at the Johnson plant.  His work must have impressed company founder Johnson, who personally offered him a position in the company.  As foreman of the company’s woodworking shop, Ullmann worked on projects such as wooden cupboards for storage batteries, cases for valves, and “all kinds of wood backs for the [temperature control] instruments.”  Ullmann was involved as well with work on pneumatic clocks, for which he built cases and oak rims (some of which were up to eight feet in diameter), and the Johnson steam-powered automobiles, which, unlike today’s cars, included several wooden parts.