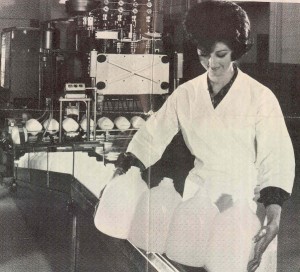 Shatterproof, lightweight, and leak-proof – plastic bottles had several advantages over the traditional glass bottles.  During the mid-1960s, plastic milk bottles evolved from mere duplicates of glass bottles to a wide range of sizes with tight-fitting caps and more comfortable handles.  Various sizes of plastic milk bottles were being experimented with, including a six-quart unit that resembled a small beer keg.

The article mentioned that the Uniloy Division of Hoover Ball and Bearing Company (which was acquired by Johnson Controls in 1985 and renamed the Plastics Machinery Division) manufactured more than 70% of the blow molding systems in use by the dairy industry at that time.