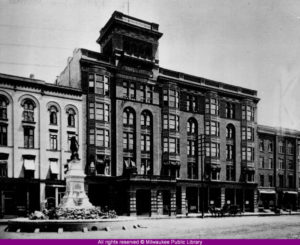 On August 18, 1891, the Pabst Brewing Company of Milwaukee contracted with the Johnson Electric Service Co. for a $1,450 installation of temperature control equipment at its Pabst Hotel in downtown Milwaukee.

Captain Frederick Pabst, president of the company that bore his name, presumably recognized the efficiency and cost savings inherent in the Johnson System of Temperature Regulation, as he had it installed in his home (1889), the brewery offices (1889), the Pabst Hotel (1891), the Pabst Building (1892), and the Pabst Theater (1895).

The Pabst Hotel in Milwaukee was originally built as the St. Charles Hotel in 1858.  Pabst bought the hotel in 1891, remodeled and expanded it, and reopened it as the Pabst Hotel.  One of the Captain’s strategies for success was opening a nationwide chain of company-owned restaurants, saloons, and hotels to promote Pabst beer in urban markets.  Pabst wanted his beer to become identified with people and places of taste through these fashionable outlets.

To this end, Pabst opened the aforementioned hotel and theater in Milwaukee, and establishments in Chicago, San Francisco, and Minneapolis.  In New York City, Pabst opened the Pabst Hotel, a hostelry for bachelors at Times Square; a restaurant and theater at Columbus Circle; a pavilion called Pabst’s Loop at Coney Island; and the Pabst Harlem, which claimed at its opening in 1900 to be the largest restaurant in America.

At its height, the company also owned about 600 corner saloons throughout the country.