Pan Am Games 1984/ The Indianapolis Branch out front .. Again! 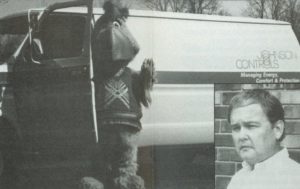 The first Games were held in Buenos Aires, Argentina in 1951, and have been held every four years since.  The idea behind the Games was to have an Olympics-style sports competition among the countries of North, Central, and South America.

In 1987, over 4,300 athletes from 38 countries competed in 30 sports and earned 1,015 medals, making the Games second only to the Olympics in size as a multisport event. 1987 marked the second time the Games had been held in the United States.

Indianapolis had been awarded the Games in 1984.  In the interim, over 150 full-time staff members and 30,000 volunteers worked together to ensure the success of the event.

Among the volunteers were several employees from Johnson Controls’ Indianapolis branch.  Most notably, perhaps, was Dave Carter, Fluid Engineering Supervisor, who donned the costume of Amigo the parrot, the Games’ official mascot, at many promotional events leading up to the Games.

Johnson Controls also had installations in many of the Games’ venues, including the Pan American Plaza, an entire city block dedicated to maintaining the spirit of the competition.