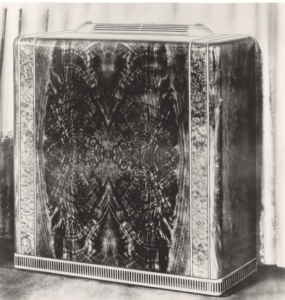 In 1935, the York Ice Machinery Corporation (later York International, which was acquired by Johnson Controls in 2005) developed the first successful single-room air conditioner.

Four years later, (on January 1, 1939), York entered into an agreement with Philco Radio and Television Corporation in which York would manufacture a line of room air conditioners exclusively for Philco’s world-wide distribution and sale.

At the time, Philco was best known for its radio sets, including the now iconic “cathedral-styled” models.  However, York was interested in the marketing possibilities that came with Philco’s distribution organization.  Philco marketed the York-built “air-coolers” under the “York Cool-Wave” trade name.

The York-Philco partnership proved lucrative for York, to which their 1939 annual report attests: “Of unusual interest in the past year’s business is the way the public accepted and purchased our recently developed products.  It represented a large portion of our total booked volume.  …  It covers also the small portable room coolers for homes and offices which we are manufacturing under contract with Philco. The types, styles and prices seemed to reach a much broader market than we have previously enjoyed.”

York’s relationship with Philco lasted until October 1956, when Philco did not renew its latest contract with York.  That same year, York was acquired by Borg-Warner.  The Ford Motor Company acquired Philco in 1961 to manufacture radios for their autos.