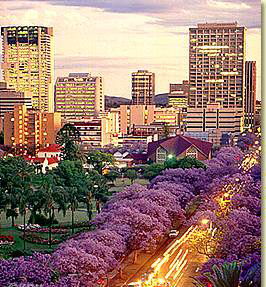 Downtown Pretoria as it looks today

On February 13, 1965, The Milwaukee Sentinel newspaper reported that the Johnson Service Company (Johnson Controls’ former name) was hosting an engineer and an architect from South Africa, who wanted to look at new designs for controls equipment for their work on a planned cultural center in their home city of Pretoria.

The engineer, Johann Potha, and the architect, Hans Potha, were part of the planning team for the center, which was to include an opera house, a theater, and office buildings.  According to Johann Potha, the Transvaal provincial government sent them to the United States for two weeks “to see what’s the general picture for office buildings and cultural centers, and what’s happening in manufacturing research.”  Johann continued, “Since we’re only in the initial planning for our cultural center, we don’t want to be committed to some outdated thing when construction starts five or ten years from now.”