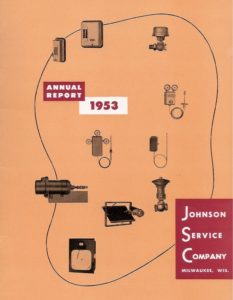 The cover of the Johnson Service Company 1953 annual report

In all, the company opened fourteen branches that year, which brought to 80 the number of offices that sold, planned, installed, and serviced the company’s automatic temperature and air conditioning control systems.

The growth in branch offices in 1953 was part of a larger post-World War II trend that saw the number of company branch offices go from 36 in 1945 to 111 in 1960, and annual net sales increase from $6 million to $67 million in the same time span.

Accounting for this rapid company expansion was, in part, the construction boom that took place after the war, as a large backlog of civilian projects could now be undertaken.

Also, growing post-war use of air conditioning in industry and commercial buildings created a burgeoning market for temperature controls.  The company was able to anticipate these trends and position itself to take full advantage of them.