Powered by twenty Sears “DieHard” batteries (made by Globe-Union) housed in the trunk, this automobile was able to attain speeds of up to 55 miles per hour with a cruising range of 40 to 50 miles on one charge.  It took four to six hours to fully recharge the batteries, at a cost in electricity of about $0.32 (1970 prices).

The car was developed for experimental purposes, but was also used as a promotional tool to highlight the company’s interest in electric cars as a partial answer to the growing problem of air pollution.  As such, in September 1970 it was displayed at several Sears outlets in the Milwaukee area, culminating with a time trial before a USAC (United States Auto Club) race at Milwaukee’s State Fair Park.

Although it was unable to hit its top speed of 55 mph, the vehicle did set a track record of 46.73 mph for an electric car.  Paul W. Leighton, general manager of Globe’s battery division, thought that a commercially-viable electric automobile was “at least seven years away.”  Needed, he said, were more advanced motors, a better method of converting battery power to variable speeds, and more power-efficient lead acid batteries. 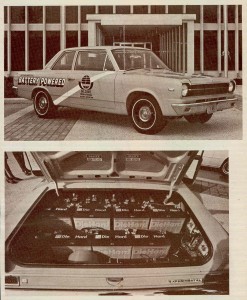