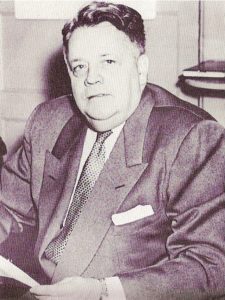 Born in Madison, Wisconsin in 1895, Vernon attended the University of Wisconsin, where he received a degree in civil engineering in 1918.  During World War I, he served as a lieutenant in the Engineer Corps.  After the war, Vernon worked for the State of Wisconsin designing several roads and bridges.

In 1923, Vernon joined the Johnson Service Company’s Chicago branch as a sales engineer.  Vernon became advertising and sales promotion manager in 1933, and he went on to spend the rest of his years with the company in that department (first in Chicago and, after 1941, in Milwaukee).

One of the most respected and well-liked men in the company, Vernon was named assistant secretary of the company in 1946, secretary in 1950, and vice president in 1951.  Vernon was dedicated to the company right up to his death, as he continued to work from his bed in the final week of his life.

Outside of the company, Vernon was active in several professional engineering societies and served as a regent for the Milwaukee School of Engineering (MSOE).