Seats for Volkswagen in Zwickau 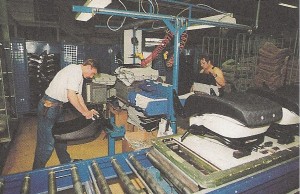 Employees at the Zwickau plant in 1995

It was announced on February 12, 1991, in the Johnson Controls Briefing newsletter, that the Company was preparing to open a just-in-time automotive seating plant in Zwickau, in the former state of East Germany.  The plant was to supply seats for the Volkswagen Golf and Polo models produced at Volkswagen’s remodeled Trabant plant, also in Zwickau.

The new facility was a joint venture with Naue, a German manufacturer of foam seat pads in which Johnson Controls held a minority interest.  Production of 350 seats per day was expected by September 1991, with plans for 1,000 seats per day by 1994.

Johnson Controls acquired its remaining interest in Naue in 1994.