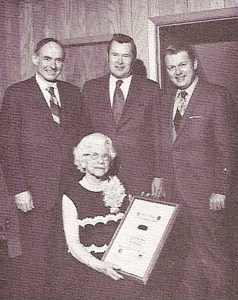 Frances Riggs-Young is shown holding the plaque commemorating her 55 years of service with Standard Electric Time, together with (from left to right) Fred Brengel (Johnson Service Company CEO), and Johnson executives Scott Jordan and William Rootham

Mrs. Frances Riggs-Young, president of the Standard Electric Time Co. (SET), a company acquired by Johnson Controls in 1967, retired after nearly 55 years of service on December 31, 1970.

Frances Wakefield joined SET in 1916 as a receptionist while taking extension courses from Northeastern University.  In 1923, she married George Riggs, the owner and president of SET.  She was made a board member in 1924, and elected secretary in 1925.

After her husband passed away in 1928, Riggs was able to help hold the company together through the Great Depression, while also raising a son.  In 1940, she was elected president of SET.

During her tenure as president the company grew ten-fold, with numerous additions to the company’s plant and facilities.