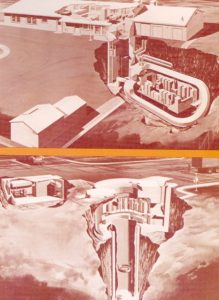 On September 21, 1964, the Johnson Service Company (Johnson Controls’ former name) announced that it was awarded the contract for Wing VI of the U. S. Air Force’s Minuteman Missile Program.  Under the contract, the company was to furnish and install automatic controls for complete air conditioning at each of the 150 Minuteman missile silos in the vicinity of the Grand Forks Air Force Base in North Dakota.

Because of the role played by the Minuteman in the country’s defense network, each Johnson system was expected to operate for at least three years maintenance-free.  The systems had to be able to withstand the strain of a missile launch and the jolt of a possible near-miss nuclear attack as well.

The contract, in the one million dollar range, maintained the company’s continuing role in the Minuteman program.  Johnson had previously supplied air conditioning control equipment to all of the 850 other Minuteman sites completed or under construction at that time.  The company had also provided environmental systems for earlier generation Atlas and Titan ICBM sites.