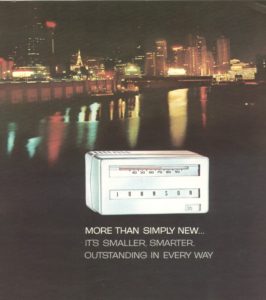 Expected to be available to the public in August 1963, the T-4000 thermostat was to replace the company’s T-400 series thermostat, which had been the company standard-bearer since the late 1930s.

The Johnson T-4000 thermostat measured just 3 inches by 2 inches by 1 ½ inches deep, and was available in both horizontal and vertical models that could be installed on any type of wall or partition.

Company engineers claimed that the T-4000 reacted to room temperature changes at least twice as fast as other pneumatic controllers on the market.  The improved sensitivity and response time of the T-4000 was attributed to its highly sensitive, miniature bimetal sensing element and its aerodynamic cover, which was developed by the famed industrial designer Brooks Stevens.  Greater control stability and accuracy was achieved in the T-4000 by incorporating a motion balance “feedback” system into its design.

Johnson engineers checked and refined the T-4000 over a period of 15 million thermostat test-hours in various building types under all kinds of climatic conditions before its unveiling.