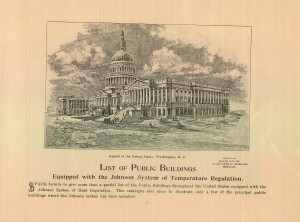 A page from a Johnson Service Company brochure from the early 1900s highlighting the Company’s installation in the U. S. Capitol

An entry from the Johnson Service Company’s (Johnson Controls’ former name) Philadelphia branch contract book dated June 15, 1905 lists an installation in both the Senate and House wings of the U. S. Capitol in Washington, D. C.

The contract was in the amount of $2,895 and was billed to the United States Government and Elliott Woods, who had been appointed Architect of the Capitol by President Theodore Roosevelt in 1902.

By this point in time, the Capitol was more or less as it is today, with mostly modernization and restoration work done thereafter.  Prior to that time, however, the Capitol had a long and tumultuous construction history.

In 1790, Congress passed the “Residence Act,” whose purpose was to create a permanent site and buildings for the U. S. Government.  The cornerstone for the Capitol was laid by President Washington in the building’s southeast corner in September 1793.

The building’s construction was plagued with problems, but Congress was able to move into the partially-built edifice in late 1800.  During the War of 1812, the Capitol was almost completely destroyed when it was set ablaze by British troops.  By 1829, however, the Capitol had been rebuilt.  The iconic cast-iron dome was added in 1866, and extensions to the wings of the building were completed in 1868, which gave the building the appearance (more or less) we are familiar with today.

In addition to its active use by Congress, the Capitol is a museum of American art and history – each year, it is visited by an estimated 3 to 5 million people from around the world.