U. S. A. F. approves construction of Texas Towers 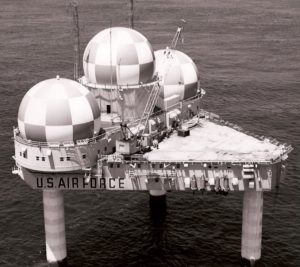 On January 11, 1954, the United States Air Force approved the construction of five Texas Towers as a part of its Air Defense System.

The Texas Towers were offshore radar facilities named for their resemblance to oil-drilling rigs found along the Texas coastline in the Gulf of Mexico.  They were constructed from 1958 to 1960 in the Atlantic Ocean along the eastern seaboard of the United States as a platform for long range radar against a possible Soviet bomber attack.

The Johnson Service Company (now Johnson Controls) was contracted to supply the controls for the Towers’ direct radiation, heating, and ventilating units, as well as its chilled water system, and exhaust fans.

The work was complicated by the fact that the entire structure was made watertight, floated to sea, and then erected.  Company workers would travel to the Tower sites by helicopter or boat, work seven twelve-hour days, and then head back to shore.

Only three (#2, #3, #4) of the planned five Texas Towers were built.  With the advent of the Soviet ICBM force, the perceived threat from a Soviet bomber attack was reduced, and the remaining Towers were decommissioned in 1963.