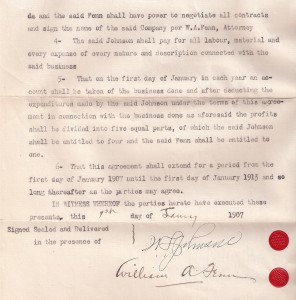 The signatures of Warren Johnson and William Fenn on the last page of the agreement dated January 1, 1907

On that date in 1907, Johnson signed an agreement with William A. Fenn, manager of the Company’s Buffalo, New York office, which essentially put Fenn in charge of all of the Company’s business north of the border.

While the Company had been doing business in Canada at least as far back as 1889, it wasn’t until April 1899 that Johnson officially registered the company in Canada (under the name Johnson Temperature Regulating Company of Canada).  Johnson had employed Fenn to look after any Canadian contracts as one of his duties.  The 1907 agreement expanded Fenn’s responsibilities while giving him 20 percent of the profit from Company installations in Canada.

Following Warren Johnson’s death in December 1911, Fenn sold his part of the Canadian business on July 11, 1912 to Paul Johnson, Warren’s son and administrator of his estate.  In a separate agreement made the same day, Paul Johnson, on behalf of his father’s estate, sold the entire Canadian business to the Company which, in turn, formed its first wholly-owned subsidiary – the Johnson Temperature Regulating Company of Canada Limited.