Before his illustrious career as an inventor and businessman, the founder of Johnson Controls tried his hand at a variety of occupations, including farming, printing, logging, teaching, writing and, yes, land surveying.  Although he had no formal training, he was able to learn the practice of land surveying on his own.

Eventually, he became County Surveyor of Dunn County (which is about 50 miles east of Minneapolis) from 1871 to 1874.  And on this and subsequent days in June 1874, 26-year-old Warren surveyed and subdivided Section 28 of Town 27, Range 12 “according to law,” using two large white oak trees as “witness to center post.” 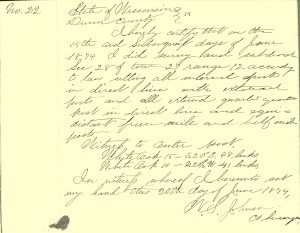