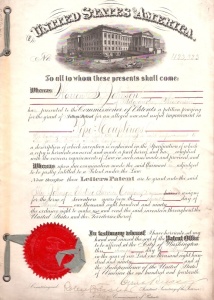 The Milwaukee Sentinel reported about “electric railway fever” back on September 12, 1889. The Milwaukee & Wauwatosa Motor Railway company had just been formed to create a route connecting Milwaukee and its neighboring city to the west, Wauwatosa.

Among the incorporators of this new firm was Warren S. Johnson, who a mere four years earlier, in 1885, had founded the Johnson Electric Service Company (today’s Johnson Controls).  Why Warren Johnson became involved was not noted, although it may be that he was searching for a market to promote his newly-invented hose coupling that provided steam heat to passenger rail cars.

Early streetcar service in Milwaukee was divided into routes controlled by four different companies.  The Milwaukee & Wauwatosa Motor Railway company was one of two “Suburban Steam Dummy Railways” created to link outlying areas with the city.

The railway company Warren Johnson helped to form actually operated from 1892 to 1898, before being acquired by the North American Company.  This company acquired all of the various railway services operating in Milwaukee by 1898 and was reorganized as the Milwaukee Electric Railway and Light Company, which operated until 1947.

By the 1950s, the electric streetcars had been phased out in favor of motorized buses and trolley cars.  Recent debate over new public transit alternatives in Milwaukee, such as light rail, recalls the original transportation developments in the city’s history.