Wilt in a VW Rabbit? 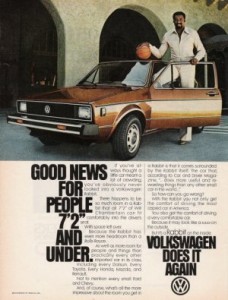 This 1979 Volkswagen Rabbit ad featuring basketball legend Wilt Chamberlain highlights the car’s roomy interior (“all 7’2″ of Wilt Chamberlain can fit comfortably into the driver’s seat”), which included seats made by Hoover Universal

On March 21, 1977, The Iron Age, a management magazine for metals producers, announced that Hoover Ball and Bearing Company (later Hoover Universal) was awarded a major contract for the production of front seat frame assemblies for the Volkswagen Rabbit.  Hoover also would be awarded a contract for production of front seat foam cushions for the same model the following month.  Production was anticipated to begin by April 1978 at Volkswagen’s New Stanton, Pennsylvania plant.

The 1979 Rabbit was the first Volkswagen made in America.  In fact, the ’79 Rabbits were the first European cars produced in the United States.