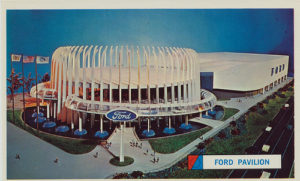 Visitors to the Ford Motor Company’s Wonder Rotunda at the 1964 New York World’s Fair, which opened on April 22, 1964, were kept in air-conditioned comfort thanks to York.

Two York EK-93 Absorption Units, with 750 tons of refrigeration capacity each, were used to air condition the Rotunda, which was seven stories high and nearly the length of three football fields.

The Rotunda featured a number of attractions, many of which were designed by Walt Disney Productions.  Among these was the Magic Skyway, which proved to be the second most popular attraction of the whole Fair.  The Skyway used Ford automobiles to move Fair-goers through a “time-barrier” to a primeval world full of animatronic dinosaurs and cavemen.

Another “wonder” of the Rotunda was the International Gardens, where visitors could view authentic miniature villages from eleven nations on “islands” thirty feet across.

The 1964 World’s Fair was the third to be held in New York.  Fifty-one million people attended the Fair during its two six-month seasons.

York was subsequently acquired by Johnson Controls (in 2005).