Hurricane Agnes struck the northeastern United States on June 22, 1972 and proceeded to drop torrential rains which caused devastating floods over much of the region.  As a result, 129 people were killed and hundreds of thousands more were left homeless.  Damage from the hurricane totaled nearly $3 billion ($16 billion in 2012 dollars).

While the storm was “only” a Category 1 (the weakest level) hurricane, it produced rain amounts of 19 inches in some locations.  That fact, along with rivers that were already running high with snow melt, caused record flooding in several states.  Pennsylvania was especially hard hit with fifty fatalities and over $2 billion (nearly $11 billion in 2012 dollars) in damages.  The entire state was declared a disaster area.

In York County, home of the York Division of the Borg-Warner Corporation (now part of Johnson Controls’ Building Efficiency Business Unit), hundreds of people were forced from their homes, and industries were shut down by the flooding rains.  Despite the muddy mess left behind by the storm, the York facility was back to operating at 80% capacity by June 25. 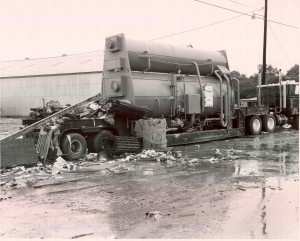 Some of the debris left at the York plant in the aftermath of Hurricane Agnes, June 23, 1972