Active & Engaged at the Winter Luncheon

If the Winter Luncheon had a theme – it would be about the benefits of being engaged in life and community – good people sharing their experiences. 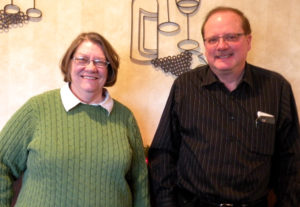 Charlene & Dave had a good time!

First off, we got to welcome Charlene Benjamin and Dave Sobczak to their first luncheon. It’s always good to re-connect with good friends and colleagues. 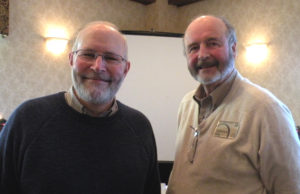 Osher, funded by the Bernard Osher Foundation, has 199 institutes across the United States with over 1,600 members. In Milwaukee the institute is located at the University of Wisconsin Milwaukee. Check the website for an Osher Lifelong Learning Institute in your area. You might find just what you were looking for, and maybe something unexpected that offers you new horizons for enjoyment and making a contribution.

Terry King, Osher Volunteer Executive provided more of the Osher story. Terry talked about the enjoyment in being an Osher volunteer, contributing to the success of the program, impacting the lives of all participants. You might recall that our own Dennis Miller is a regular program instructor with Osher. Check it out!

As a bonus for the day, Beth Chapman came with news that her son Craig had written a book about Bill Chapman’s experiences during World War II. The title is “Battle Hardened: An Infantry Officer’s Harrowing Journey from D-Day to V-E Day.” The story centers on Bill, but it’s also the story of Bill and Beth, their experiences as a young couple during those last years of the war.

At Johnson Controls, Bill was VP Chief Technology Officer, a leader on Fred Brengel’s staff. Among other achievements, Bill created the Research Department that had attracted me from Marquette University in 1972. Bill always struck me as one of those quiet leaders who worked well with others to get the job done. He even became the President of ASHRAE, advancing its standards. I had no idea that he had led his squad in the D-Day landing on Utah Beach. And that he was one of the few officers who would survive that D-Day landing through to V-E Day.

I highly recommend the book. Get it for the whole story. Craig did a fantastic job in putting it together. It’s a combination of those personal stories Bill told his family over the years and the historical records that Craig and his wife researched to place Bill’s stories in their time and place – their real experiences. 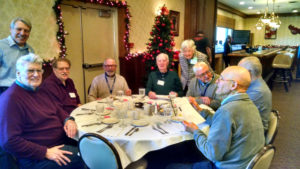 Beth and a few of her friends …

Now, the rest of the story, Bill retired from Johnson Controls in 1986. Some of our members didn’t know him. However, they have all come to know and love Beth who is a regular participant at our luncheons. Beth and Joan Brengel have been regulars at the reunion dinners. They are both fantastic people to know. That’s one of the benefits of membership for the rest of us! Thanks Beth for sharing your story.

Get the book … buy a copy or check it out from the library. Milwaukee Public Library already has it – 4 locations. It’s a first hand account of the courage under fire by the men and women who led the world through those dangerous times.