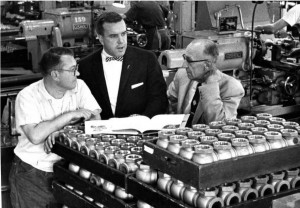 Edmund B. Fitzgerald, who led Cutler-Hammer for 15 years and was a key player in bringing major league baseball back to Milwaukee, died on August 28th.

He was identified as one of four men who led the long fight to get another baseball franchise for Milwaukee. One of the other four, Bud Selig, was Brewers president. Fitzgerald was by then Brewers vice president.