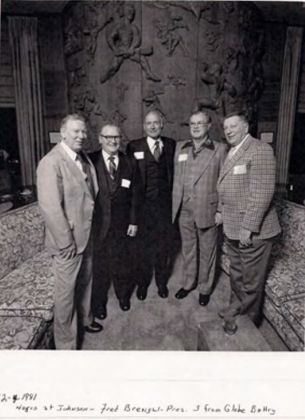 I would like to share with you a little history of our company during my time spent there. I was hired in 1941 by R.J. Murphy, the Vice President of Johnson Service, after graduating from Concordia College, Milwaukee, WI. How many of you can say that?

My job was office boy. As part of my job, each day on my way to work, I picked up the mail from the main Milwaukee Post Office across the street and put the bag on the desk of Vice President R.J. Murphy. He and the head accountant would go through all of the mail and sort it. I would then take it to the various departments.

Remember, our 7-story building at 507 E. Michigan Street housed all of the manufacturing. Starting at the top: 7th floor was the brass foundry with some engineering; 6th floor was plating and engraving; 5th floor was assembly for thermostats; 4th floor was our storeroom (locked at all times), 3rd floor housed the machine shop; and the 2nd housed more machine shop plus the valve and damper assembly. We are now down to the first floor, the Milwaukee Area Branch Office, where A.J. Otto had his office. His brother Carl, the Chief Engineer, had his office on the sixth floor. Sometimes the company was referred to as the Otto Company as the two brothers ran it.

Remember, through the years our company grew with purchases of other plants, such as the one on the northeast side of Milwaukee, the Humboldt Plant, a move to Georgetown, KY, and then a move to Mexico for manufacturing to bring the cost down. During the 70’s, there was the purchase of Globe Union for the manufacture of batteries.

During my days at Johnson, WWII interrupted my time. I was drafted and sent to the Army. I qualified for Officer Candidate School at Camp Davis and graduated from there. Then I found myself on the way to Europe to serve under General Patton in the 3rd army. After the war I returned to Johnson Service in various positions. When I retired, I was the Head of Production Planning for the T400 thermostat.

Come Christmas time, the parties were what I remember well. I would start on the 6th floor and work my way down, having a few spirits on each floor, enjoying the company and quite in the spirit by the bottom floor. Merry Christmas!