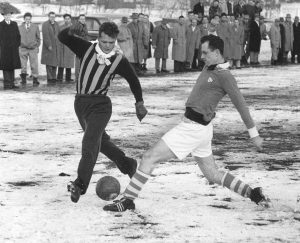 Early in my JCI career, I coached soccer at the Bavarian Soccer Club. I coached in the youth leagues, starting with the Under-8’s progressing to to the Under-17’s. That fellow on the right in the picture, Gebhardt Winbiel was my mentor. After his playing years and coaching the major team, Gebhardt  started the youth program at the Bavarian club, adding a younger group each year. I was lucky enough to be there when he was starting the Under-8’s. He asked and I volunteered to help. That’s me and the team below, at least those who could make it to the photo shoot.

I learned a lot from Gebhardt, not just the very successful Bavarian soccer techniques, but also about coaching, about teamwork, and about enjoying the entire experience. We didn’t  call it mentoring, he’s just that kind of person who wanted to help others enjoy the sport he loved so much. 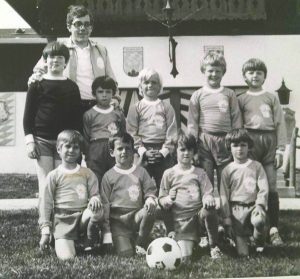 When I started at JCI in 1972 I had no concept of the role of mentor. However, I was lucky enough to have that kind of relationship with Norm Janisse, Andy Schlidt, John Donovan, Gerry Gaudet and others in my career. I learned a lot from each of them and really enjoyed the experiences we shared. It wasn’t a formal mentor relationship — like Gebhardt, they are the kind of people who were just willing to help someone in a new job along the right path.

Looking back, I did something like that when I was a sophomore at Marquette School of Engineering. There were 132 engineers in my dormitory, Monitor Hall on 16th street, across the street from the Engineering School. A friend, Gerry Dommershousen, had passed around my name as someone who would help anyone having difficulty with class work. He had done that in his first and second years, and wanted to set up a replacement since he was moving out of the dorm for his third year. After graduation he taught control theory at several tech schools in Wisconsin and was a regular volunteer Big Brother. He was a passionate mentor — someone who thrives on helping other people through their challenges.

Overall that was a good experience for me. I used the questions other students brought to me as review and preparation for my tests. I remember one special freshman, Tom, who came into my room frustrated, ready to call it quits. He told me he had been dreaming about being an engineer since he was in grade school, but was totally confused, ready to call his parents to come pick him up. This discussion wasn’t just about geeky problems; this was a big decision. What did I know about helping him out with that? I suggested we just look at the problems and talk it all over. We spend about 1 hour together. He clearly knew how to do the work, and really wanted to be an engineer. All I did was to assure him that he could do it, and to stick with it. That was it.

Thirty years later I was in Marketing at 507 when Clay Nesler came into my cube insisting that I go down to the demo room. There was a customer who wanted to see me and would not talk to anyone else until I came down to meet him. Sure enough, it was Tom. He wanted to say thanks to me for helping him out all those years ago. Tom had indeed completed his degree, got his P.E. and started his own engineering firm — a very successful firm. Later on Tom received ASHRAE’s recognition for his lifetime contribution, a great career! Oh, yes, Tom regularly gave back to his community. His practice included on-going educational sessions for facilities managers from local schools.

My 1 hour contribution to Tom’s success was certainly very, very small, but I think that’s how this mentoring thing creates its impact. Mentors are just people who are willing to help. You never know what impact those few minutes will have, but mentors give them their best and do it freely. It’s how we all learn to be better at whatever we do.

Today, I identify my work as mentor/ coach to local startups. I have the opportunity to work with some very creative and dedicated startup founders. And, I find myself still learning, from them and the other instructors and mentors in the programs. It’s how we all get better together. And, like that lesson from Gebhardt, we enjoy the entire experience.

I recommend mentoring as a great challenge for encore careers, of value to anyone willing and eager to help.  You might be just the right person to help someone along their way — it may only take a few minutes!

We are indeed better together,

Past Notes: From the Editor Archive

P.S. The pictures were posted by Bob Gansler, a former youth player at the Bavarian Club, now a successful engineer. In his free time, Bob posts the history of the Bavarian Soccer Club on a Facebook Group. It’s a long story. The club was founded on July 29, 1929 at Lake Park in Milwaukee and continues to make soccer history on its “Bavarian” quality field in Glendale, WI.